As the world continues to grapple with mounting crises such as the impacts of Covid-19, the rising cost of living, the impact of the war in Ukraine and climate change, the AEF was proud to leverage its network of thought leaders and partners to reinvigorate multilateralism and work towards a common shared agenda for a prosperous world, amid growing global challenges and geopolitical shifts. 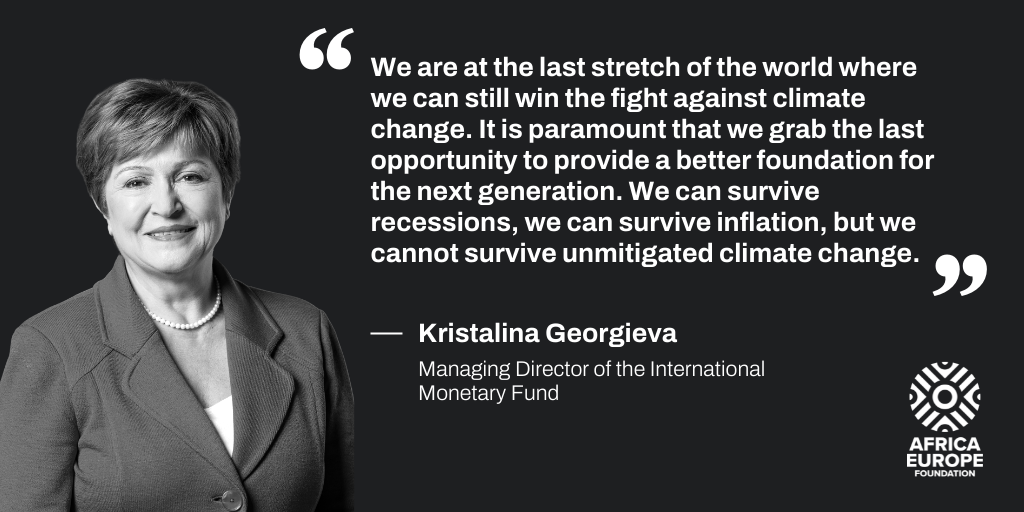 Meeting on the 19 of September, influential women leaders from the Africa- Europe came together for an in-person breakfast meeting at the Irish Permanent Mission in New York to discuss investment in climate adaptation and unblocking cross-continental action on critical issues including loss and damage.

The Women Leaders Network (WLN) brings together changemakers and international policymakers committed to catalysing collaborative actions as part of a strengthened Africa-Europe partnership and in the face of the global climate emergency. 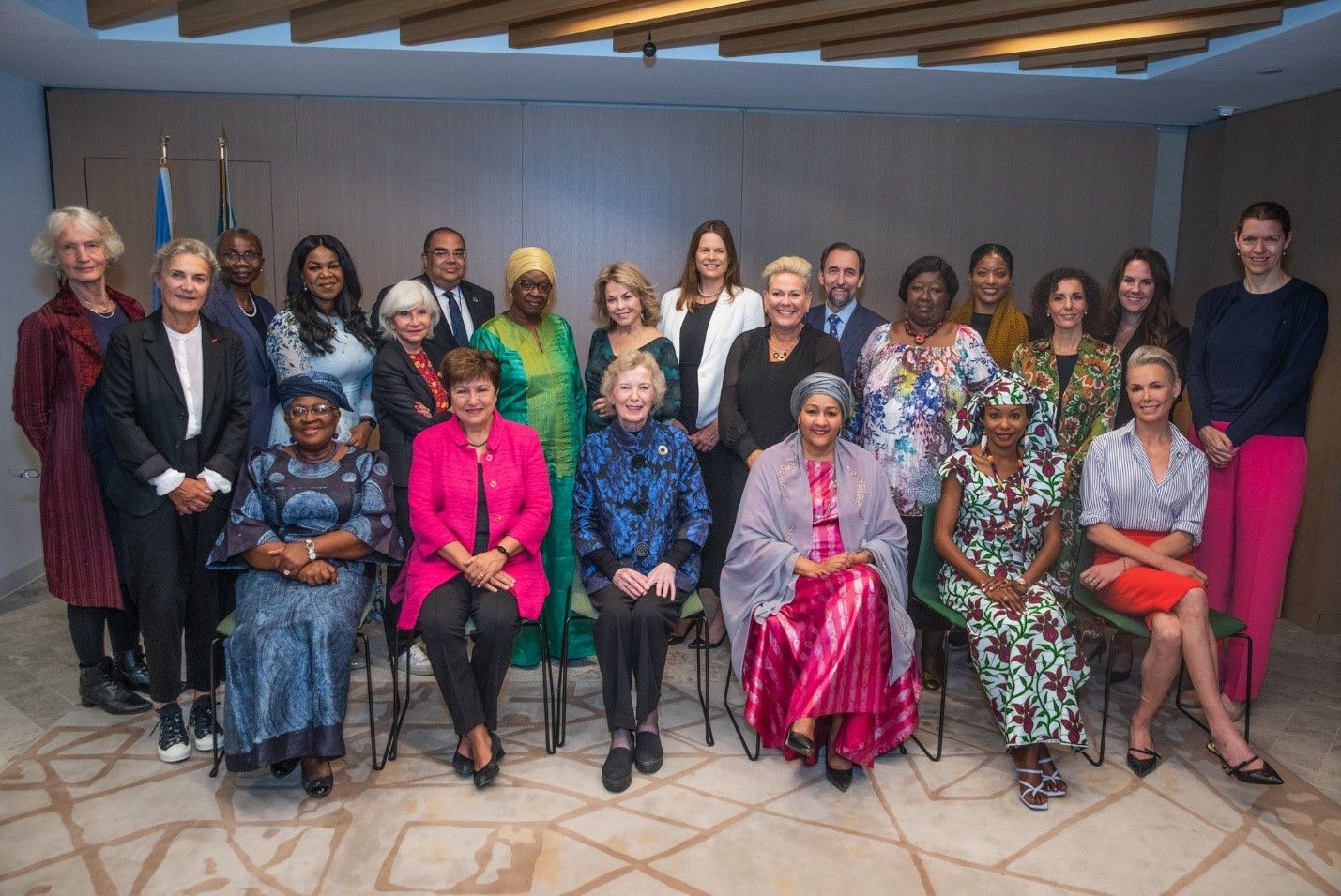 The WLN meeting marked the launch of the AEF programme at UNGA77, focusing on catalysing collaboration on Agri-food systems, Climate Adaptation, Digital Economy, Investment in Youth and the Future of Health workforces.

Chaired by co-presidents of the AEF, Ellen Johnson Sirleaf (Nobel Laureate and Former President of the Republic of Liberia) and Mary Robinson (Chair of the Elders and former President of Ireland), the meeting was anchored by the AEF Policy Brief on Climate Adaptation, which sets out priority areas of cross-continental action, from the investment in climate resilient infrastructure to creation of a Loss and Damage Facility, from delivering on the promised $100bn target from the Paris Agreement to addressing African countries’ capacity to access funds, to ensure adaptation finance reaches the most vulnerable and marginalised people.

stated President Mary Robinson.
During the discussion, WLN members emphasised the urgent need to identify ways to increase investment from private finance in building climate resilience, notwithstanding the provision of adequate technical and technological support to address adaptation action and finance in the lead-up to COP27.

adding that “I welcome the Africa-Europe Foundation’s focused discussion on doubling adaptation finance, and loss and damage, and hope this work can help build momentum to COP27”.

She argued that adaptation action can be the right levy to reinforce the cross-continental partnership and sectoral joint working, as well as to strengthen the wider influence that the two continents have on climate diplomacy.

In a statement following the meeting, the WLN collectively called for urgent action:

The AEF translated the discussions from the high-level week into concrete action, through convening the experts and policymakers on the margins the UN Science Summit, for the first Africa-Europe Foundation Day on 27th September.

The first ever Africa-Europe Foundation Day at UNGA!

On Tuesday, 27 of September the AEF organised its first ‘Africa-Europe Foundation Day’ as part of the Science Summit at UN Head Quarters co-hosted with the Permanent Mission of the Republic of Senegal and the Consulate General of France.

The Day brought together leading global voices including Government, Heads of Industry and Philanthropy as well as youth activists to raise ambition on cross-continental cooperation amidst global crises.

Throughout the day a series of roundtables were held to profile new policy research, moon-shot ideas and catalyse action and cooperation on three impending issue areas: climate adaptation, food security, and digital economy.

The opening focussing on ‘Agri-food Systems: Increasing resilience to shocks and crises’ featured keynotes from the UN, the AU and EU to focus on the opportunity for a partnership on food systems between Africa and Europe and accelerating progress towards food and nutrition security for all by 2030.

Joining the session H.E. Olof Skoog, Ambassador and Head of the Delegation of the European Union to the United Nations underscored that there has never been a more urgent time to discuss the partnership through this lens and to demonstrate the joint global engagement that both continents share at a multilateral scale. Echoed by H.E. Fatima Kyari Mohammed, Ambassador and Permanent Observer of the African Union to the United Nations, both ambassadors jointly highlighted that despite the ongoing war in Ukraine and its reverberating effect on global good food security and nutrition, the EU and AU continue to maintain a high-alert on this strategic priority and the commitments made at the EU-AU Summit in February as we look towards COP27.

Although both Commissions remain confident in the partnership, Christina Duarte, Under Deputy Secretary-General of the United Nations and Special Adviser to the UN Secretary-General on Africa, underscored the importance of building resilience and strategic autonomy for African countries who are disproportionally affected by price and supply shocks as well as the ongoing impact of the climate crisis. 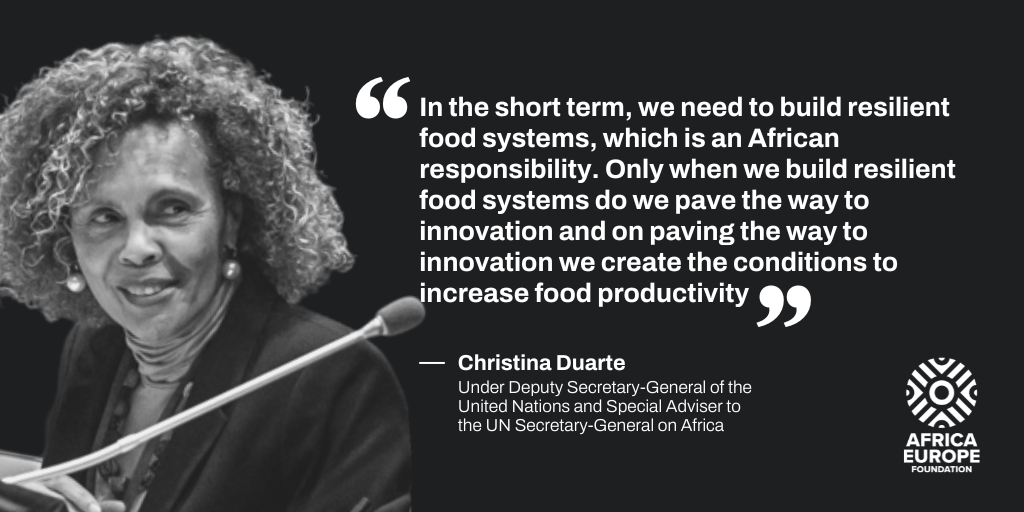 Providing invaluable sectoral expertise, Wanjira Mathai, Managing Director, Africa and Global Partnerships at the World Resources Institute (WRI); and Stefanos Fotiou, Director, Office of Sustainable Development Goals at FAO and Director of the UN Food Systems Coordination Hub, highlighted the importance of partnerships and financing mechanisms which are readily available to local partners as well as improving the clarity of commitments and quantity of allocated funds.

Building on the urgency to act now, the second session focussed on “The Road to COP27: Scaling up Climate Adaptation Financing”. With only eight years left to halve global emissions, and already six years spent negotiating the Paris rulebook, COP27 must be the year that the international community makes the shift from mistrust and siloed commitment to unified action and implementation.

Additional speakers who joined the session were:

Romy Andrianarisoa, Chair of the Commission for Sustainable Development and Business Ethics – Groupement des Entreprises de Madagasar; Vhalinavho Khavhagali, Senior Fellow for Adaptation at the Africa-Europe Foundation, and country representative for South Africa at the International Union for the Conservation of Nature (IUCN); and Catherine Patillo, Deputy Director of the African Department of the International Monetary Fund (IMF)

Speakers concluded that in order for COP27 to be a success and break barriers of mistrust and move towards a unified global partnership, leaders from high emitting countries must urgently meet their unmet commitments to deliver climate financing for adaptation, loss and to damage.

Changing tack in the afternoon at the French Consulate General of New York, the importance of looking ahead to a joint digital future for both continents was underscored by the final session of the day on “Responsible AI for Africa’s Development”.

Artificial Intelligence (AI) can be a key enabler to achieve Sustainable Development Goals. Speakers concorded that the development and dissemination of responsible innovative AI solutions needs to be supported by policy and regulatory frameworks, skills development for professions including engineers and researchers and the necessary data storage capacity. 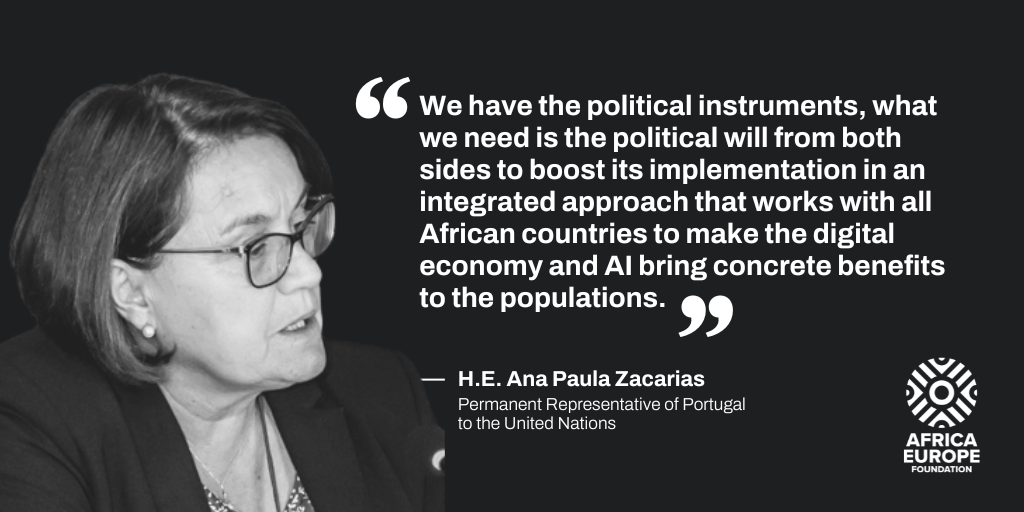 Joining the session were:

Closing off the day in a successful final networking reception hosted with the support of the French Consulate General of New York, H.E. Cheikh Niang, Permanent Representative of Senegal to the United Nations and H.E. Jérémie Robert, Consul General of France in New York underlined the AEF leadership as crucial in driving the conversation on agrifoods systems, climate adaptation and digital economy and the AU-EU relations.

The AEF’s highlighted its commitment to bringing the Africa-Europe partnership to the fore and over UNGA met with heads of leading philanthropic foundations among them the Wellcome Trust, Gates Foundation and Rockefeller Foundation.

Our Executive Director, Paul Walton also joined Global Science Leaders as part of a joint initiative with IBM to discuss creative strategies for connecting changemakers and policymakers as well as an event on “The AU-EU Innovation Agenda” hosted by the European Commission Directorate General for Research and Innovation and the African Union.